Should You Eat a High Fat Diet or a High Carb Diet? 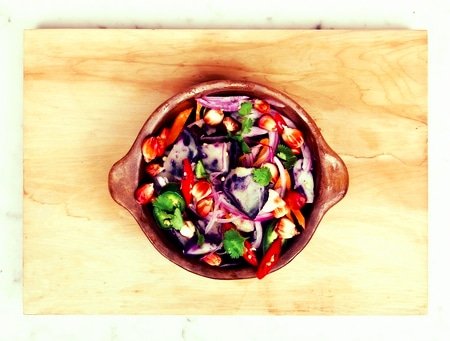 Kevin Gianni released his newest book, Kale and Coffee. If you haven't been following, click here to see our first interview with Kevin (yep, that's Annmarie's husband and co-founder or Annmarie Skin Care).

Some of his findings are surprising, like what kind of coffee is bad for you, and why some people think they're gluten intolerant, but aren't. A main message of the book is that there isn't a one-size-fits-all diet. There are lots of different diets that can make you healthy, and it depends a lot on your individual makeup.

This is true when it comes to whether to eat a high fat diet or a high carb diet. You may be thinking, ‘Aren't those both bad?' But it turns out that's not necessarily true.

Kevin explains more in this video:

Exclusive Interview: A Ridiculously Simple Way to Decide Whether to Eat a High Fat or a High Carb Diet

Take a Peak Inside Kale and Coffee

Chapter 9: Sugar, Carbs, and Gluten: A Holy Trinity of Disease…or Not?

I’ve never met or spoken to Tom Staniford, but he seems like the type of guy I’d like.

Tom was born with a rare genetic disorder called mandibular hypoplasia, or MDP syndrome, which doesn’t allow his body to store any fat. Only eight people in the world have it. Because of MDP, Tom’s face and body are literally skin and bones, his muscles are stiff, his hearing is bad, and he has diabetes. But these limitations haven’t slowed him down. He’s a competitive professional cyclist. In 2011, he won the British National Para-Cycling Circuit Race Championship in his class. Not so bad.

While taking a break from some research, I read about Tom in an article on the BBC website. I was surprised to find that this genetically skinny man has type 2 diabetes—a disease that mostly affects over- weight people. How could this skinny cyclist get diabetes?

It’s no secret that eating too much sugar or too many carbs messes with your body’s blood sugar balance. Blood glucose, which is basically sugar in the blood, is required for you to survive. Too little and you die. Too much and you risk getting type 2 diabetes.

When you eat sugar or carbs, your body produces insulin, a hormone that helps your body absorb sugar from the blood and store it in your liver, muscles, and fat tissue. Too much sugar in the blood causes the pancreas to release a flood of insulin. When this occurs, two things happen. First, the body’s fat-burning capacity is switched off, so it can burn sugar as fuel. And then, because there is so much insulin in your bloodstream, your body stores too much sugar (which it converts to fat) and the glucose levels in your blood drop too low.

This means you’ll need to eat more sugar to bring them back into balance. More sugar, more insulin, more fat, less blood sugar—it becomes a cycle. Type 2 diabetes comes along when your pancreas says I’m through with this roller coaster, gets tired, and slows production of insulin.

But what about those cultures that eat traditional diets that are high in carbs and don’t suffer from an epidemic of diabetes like we do? In his famous China Study, described as “the most comprehensive study of nutrition ever conducted,” T. Colin Campbell, a researcher at Cornell University, found that while the rural Chinese diet is approximately 80 percent carbs and only 10 percent fat and 10 percent protein, it is extremely healthy for them.

They don’t suffer from the high incidence of diabetes that urban-dwelling Chinese, who eat a more Westernized diet, do. If sugar or carbs were causing problems for the rural Chinese, they would be the largest consumers of insulin shots in the world, but they’re not. So there must be another factor. What happens in Tom’s body tells us what it is.

The other factor is fat—specifically, fat in the bloodstream.

Since Tom can’t store fat, his blood is filled with it. His diabetes is caused by the excess fat in his blood, coupled with the normal amount of sugar and carbs in his diet. This is exactly what causes type 2 diabetes in most people—the combination of carbs and sugars with fat, not the sugar and carbs themselves. What this means is that a low-carb, higher-fat diet like the paleo will likely decrease your risk of diabetes just as much as a whole food, high-carb, low-fat diet will. The dietary combo that is the troublemaker is high fat plus high carb…

Get a Free Copy of Kale and Coffee

You'll meet lots of characters from the health word in Kale and Coffee. Plus, you’ll learn how to make changes to your own health by detoxing with his 21 Day Jumpstart program. It’s a truly practical approach to achieving your health goals.

To get a copy of Kevin's book Kale and Coffee, head straight to Amazon if you'd like to purchase it!