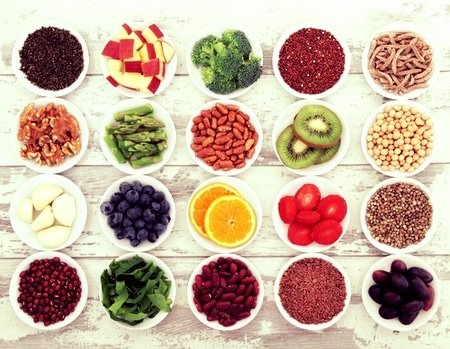 Quickly: Name all the skin problems related to inflammation.

We’ll help you out. Here’s a list of some of the top skin conditions that are caused or exacerbated by inflammation:

Now we know that inflammation can also cause a number of skin problems, such as those listed above. So how do we tame this inflammation to keep skin looking it’s best? Believe it or not, we can greatly improve the situation with diet!

It’s true—what you choose to eat today could mean the difference between clear skin tomorrow or a nasty acne breakout or red rash.

If you cut yourself, for example, your skin gets red and swollen. That’s inflammation—a sign the body’s immune system is doing its job of killing off any infectious invaders, to be sure the skin can heal properly.

A fever is also an inflammatory reaction, when your body ups its own temperature to fight off a viral or bacterial illness. In fact, any time the body senses an intruder, stress, damaging cells, irritants, or some other problem that signals something is going wrong, the immune system responds to fix it, and you have inflammation.

Short-term inflammation is good for us. It helps us heal. The problem is in today’s world, a lot of us are walking around with chronic internal inflammation—inflammation inside the body that doesn’t go away, but simmers at a low level, gradually causing damage.

A number of things can cause long-term inflammation. Here are a few:

All of these can lead to internal inflammation—which of course, affects the skin! Things like a lack of sleep, exposure to pollutants, poor diet, and stress are especially harmful to skin.

Rescue Your Skin by Eating Foods that Fight Inflammation

You can help tame internal inflammation with the following foods. Not only will they help counteract the effects of stress, lack of sleep, and exposure to pollutants, but they’ll help provide your skin with the nutrients it needs to repair itself, as well.

Do you find your skin looks better when you eat certain anti-inflammatory foods? Please share your story.

Annmarie Gianni is a mother, health activist, entrepreneur, and founder of 3 successful businesses. Over ten years ago, she and her husband, Kevin, formed a team and Annmarie Skin Care was founded to provide a clean, skin care made with natural ingredients experience using natural, organic and wildcrafted ingredients. After a few years of focusing on creating a successful skin care business, Annmarie was able to step away and focus on raising her kids. Today, you’d find Annmarie volunteering her time at her kid’s school, helping out at community events, going on trail runs, and spending quality time with her family.