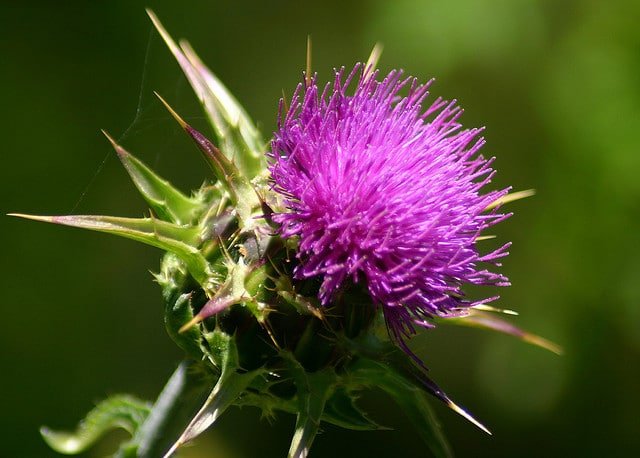 Like the life everlasting flowers, milk thistle (silybum marianum) is a member of the sunflower family, and is now a common weed in California and other states. It's been used for centuries as a detoxifying herb, but more recently has come into play as a powerful healing plant for the skin.

Named for their mottled splashes of white and milky sap, milk thistle is native to the Mediterranean regions of Europe, North Africa, and the Middle East, but is now found throughout the world. Also called Holy Thistle and Lady's Thistle, it likes sunny areas, and has spiny stems that reach 5-10 feet tall. Wide leaves have white “veins,” and the flowers are reddish purple. Milk thistle spreads quickly and easily, and is often considered a weed.

For thousands of years the plant and its seeds have been used as a remedy for liver, kidney, and gall bladder problems. The seeds contain a flavonoid called “silymarin” that has shown in scientific studies to help protect the liver from toxic chemicals, including certain drugs like Tylenol (acetaminophen). Even today, it's often suggested as a treatment for alcoholic hepatitis, alcoholic cirrhosis, and viral hepatitis, particularly hepatitis C. The herb is also used to treat heartburn and may lower blood sugar in people with diabetes.

The active constituents in milk thistle seed indicate its benefits to the skin. These include:

In addition to these effects, milk thistle also soothes and moisturizes. People with sensitive skin could benefit from milk thistle formulations.

Perhaps the most exciting benefits of milk thistle seed are its anti-aging effects. These are believed to be due to the antioxidant protection of silymarin.

You'll find milk thistle seed in the following Annmarie Gianni Skin Care products. Try them out and let me know what you think!

Have you tried milk thistle seed for skin or other health benefits? Please share your story..