MENUMENU
You are here: Home / Hot Topics / CBD: Beginner’s Guide to Cannabis Oil and 9 Benefits of the CBD Compound 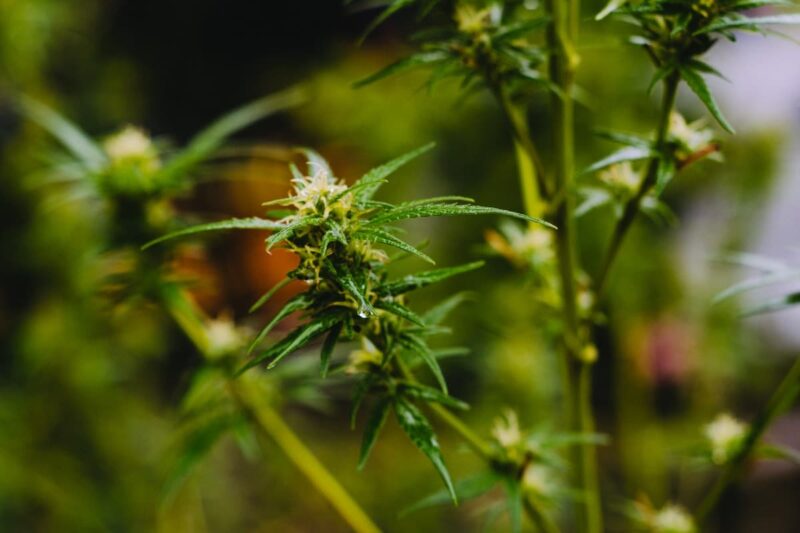 “Have you tried the new gourmet market in the neighbourhood?” a friend asked me recently. Confused I inquired where the new market is. Turns out, I was not the one confused.

With a modern glass front entry, a store name displayed prominently in a classy font, bottles of what looks like soda or kombucha in a typical grocery cooler and diverse products lining the shelves in beautiful packaging, it is not surprising that this new style dispensary around the corner from my apartment was mistaken for a gourmet market.

January 1st, 2018 California legalized marijuana and residents can now enter and purchase from dispensaries without a card. Curious, I went to my new local dispensary and was shocked at what I found.

It really did feel like a gourmet market and pharmacy. Mints, chocolate, candy, soda and beer were dispersed between vape pens and cartridges all clearly labelled with their benefits and intended uses.

The defining difference is that you can’t take anything off the shelves without assistance and the wall full of glass jars filled with nuggets of weed, rolled joints and liquid THC, the substance in marijuana that gets you high.

Next to these were tincture bottles labelled with a different acronym. Curious, I asked one of the 7 shops workers standing clearly by to lend a hand, “What is this?”

Turns out it was CBD Oil, an oil that isn’t supposed to get you high at all and comes with a list of suggested benefits that are astonishing.

I set out to discover, is CBD snake oil or have we finally found a fountain of youth?

5 Herbal Teas to Calm Your Mind and Relieve Stress

What is CBD Oil?

Cannabidiol (CBD) is a chemical compound that comes from the hemp plant. It is one of over 85 unique compounds found in hemp, all known as cannabinoids.

The most amazing discovery in my research is that Cannabinoids can be either consumed (phytocannabinoids) or produced naturally by the body (endocannabinoid). They are chemical compounds that interact with the body’s central regulatory system (the endocannabinoid system).

what is the endocannabinoid system?

The endocannabinoid system is possibly one of the most fascinating systems in the body. Similar to how we use vitamin C to kick-start our immune system, CBD acts as a kickstarter to help the functions of the body’s central regulatory system. It is made up of endocannabinoids and their receptors.

These are found everywhere in the body from the brain and other organs to glands and immune cells. The endocannabinoid system works differently in different parts of the body but the end goal is homeostasis (internal balance).

You may have even felt the effects of your endocannabinoid system recently.

Ever heard of a “runner’s high”?

Research reported in the Scientific American found endocannabinoids are largely responsible for this natural “hit” of euphoria that increases feelings of well-being and decreases the perception of pain.

Will CBD Oil get you high?

The short answer is: No.

There are two different types of CBD oil – hemp-based CBD oil (the one I’m talking about in this article) and marijuana-based CBD (which is what someone would buy at the dispensary).

Both contain CBD, and they’re both derived from the cannabis plant, but Hemp and Marijuana are different varieties of the plant.

the difference between CBD and THC

Cannabidiol Oil is a product that’s derived from cannabis. Until recently, the most well-known compound in cannabis was delta-9 tetrahydrocannabinol (THC). This is the most active ingredient in marijuana.

Marijuana contains both THC and CBD, but the compounds have different effects. Marijuana-based CBD is generally going to have more THC and other cannabinoids. CBD oil does not contain THC (the compound that causes a “high” feeling). This is an important distinction that many people don’t understand.

THC is well-known for the mind-altering “high” it produces when broken down by heat and introduced into the body, such as when smoking the plant or cooking it into foods.

Unlike THC, CBD is not psychoactive. This means that it does not change the state of mind of the person who uses it. However, it does appear to produce significant changes in the body and has been found to have numerous medical benefits for various health issues.

Highly concentrated doses of CBD oil have been successfully used to treat epilepsy in a number of research studies. CBD has been repeatedly shown to treat effectively — through clinical trials on humans [not mice] — severe forms of childhood epilepsy.

CBD hemp oil is well known to reduce feelings of stress, as well as prevent depressive episodes by increasing the levels of “positive” hormones and neurotransmitters in the body.

Although some people claim that marijuana makes them “paranoid” or anxious, that is largely due to the psychotropic THC found in cannabis. Those with PTSD are often overcome with anxiety and stress, so patients frequently find relief by using Cannabidiol.

One of the few side effects of CBD oil is tiredness, but for many, it’s what they seek out in the natural herb. Since pharmaceuticals for aiding sleep pose risk for addiction and leave you feeling groggy the next day, a new alternative is non-habit forming Cannabidiol.

In a double-blind, placebo-controlled study, 24 smokers were randomly chosen to receive either an inhaler of CBD oil or a placebo.

Over the week, those with placebo inhalers saw no change in their total number of cigarettes consumed, while those who were taking CBD saw a nearly 40 percent drop in their intake.

A study published in the Journal of Clinical Investigation and the National Institute of Health discovered that CBD can provide treatment for blemish-prone skin.

Researchers came to the conclusion that CBD acts as a highly effective sebostatic and calming agent by inhibiting lipid synthesis.

In a study using CBD, the development of diabetes in non-obese diabetic mice was prevented. Although there wasn’t a direct effect of Cannabidiol on glucose levels, the treatment prevented the production of IL-12 by splenocytes.

A 2011 study that focused on CBD treatment for fibromyalgia produced very promising results for future uses in treatment. Half of the 56 participants used Cannabidiol, while the other half used traditional methods to treat their condition.

Those that used cannabis saw a great reduction in their symptoms and pain, while those using traditional methods didn’t see much of an improvement.

THC and CBD interact with the system that controls gut function in the body, something that Crohn’s patients suffer with. The component of cannabis’ calming ability can bring a lot of relief to those suffering from this condition.

Scientists at the Cajal Institute used animal models and cell cultures to find that Cannabidiol served as durable protection from the effects of multiple sclerosis.

Mice with 10 days of CBD oil treatment had superior motor skills and showed progression in their condition. Using this information, researchers concluded that CBD has the potential ability to reduce various aspects of MS.

How to use CBD Oil

CBD is extracted as either an oil or powder. CBD can be inhaled through vape pens, applied in topical salves, ingested in edibles, or swallowed in oil-based tinctures.

How CBD should be used depends largely on what it’s being used for. Talk to your doctor before using CBD oil. It hasn’t been approved by the U.S. Food and Drug Administration (FDA) for any medical uses, and it can have side effects.

CBD oil usually doesn’t have any major risks for users. However, side effects are possible. These include:

Where Can You Get it?

As of November 2017, 29 United States have legalized the medical use of Marijuana and 44 states legally allow usage of CBD Oil. The laws differ state to state and can get confusing.

it depends on the state – for now

Some states sell CBD oil off the shelves of health foods stores, other states require a medical marijuana license to purchase CBD in a dispensary and even others allow the use and possession of CBD but do not allow the sale of it. Interesting, right?

So, what does that mean if you want to get some to try for the benefits that this magic elixir supposedly offers? Check your state laws. The references below are a good place to start. Just know that the laws may have evolved by the time you are ready to purchase it.

It is also important to note, be clear about what you are purchasing if you choose to try it. A good example is product claims of pure Hemp Oil. Hemp oil can be a great cooking oil and skin soother, however, unlike CBD oil, hemp oil is derived from the seeds of the hemp plant.

This means that the number of cannabinoids found in hemp oil is actually quite low. The CBD content of this oil may be close to 0%, whereas the CBD content of CBD specific hemp oil can be as high as 15% or more.

With thousands of small businesses getting involved in the medicinal marijuana industry, it is more important than ever to research brands to ensure quality and ingredient profiles of what you are consuming.

Fountain of Youth or Snake Oil?

The verdict may be mostly dependent on your source of the oil.

Hemp Oil without CBD present being passed off as a cure for cancer is definitely a snake oil in my opinion. Contrastingly, research and trials showing that for some parents of epileptic children CBD Oil has been a miracle and creates hope this oil may be a life saver.

The research is booming right now for this magical extract and I am excited to see what will result in months and years to come. At the very least this cannabinoid ingredient is changing the face of the marijuana industry for good.

Have you ever tried CBD Oil? What did you notice? Let us know in the comments below.
Recommended Reading:

5 Herbal Teas to Calm Your Mind and Relieve Stress

References:
11 Benefits of CBD Oil (Cannabidiol) & Why It’s Not What You Think
The Complete CBD Resource
What is CBD
Everything you need to know about CBD oil
WTF Is Up With CBD Oil And Other Marijuana Products That Supposedly Cure Everything?
Science Seeks to Unlock Marijuana Secrets
A powerful new form of medical marijuana, without the high
The Wonder Drug
CBD Oil: Benefits, Uses, & Side Effects
6 Benefits of CBD Oil
A Primer About Cannabidiol And The Benefits Of CBD
10 Little-Known Uses for Cannabidiol or CBD Oil
29 Legal Medical Marijuana States and DC
Anxiolytic-like effect of Cannabidiol in the rat Vogel conflict test
Pathways mediating the effects of cannabidiol on the reduction of breast cancer cell proliferation, invasion, and metastasis
Is CBD Oil Legal? Depends on Where You Are and Who You Ask
CBD and the Brain: What Does It Do and What Is It Good For?

Radiance and Ritual: Meet Johanna Braddy, Actress and Clean Beauty Ambassador
Next Post: 10 Tips for Your Summer Skin Detox—Get Your Glow On!