Click here to set up a FREE personalized skin consultation with our team.
MENUMENU
We Heart... 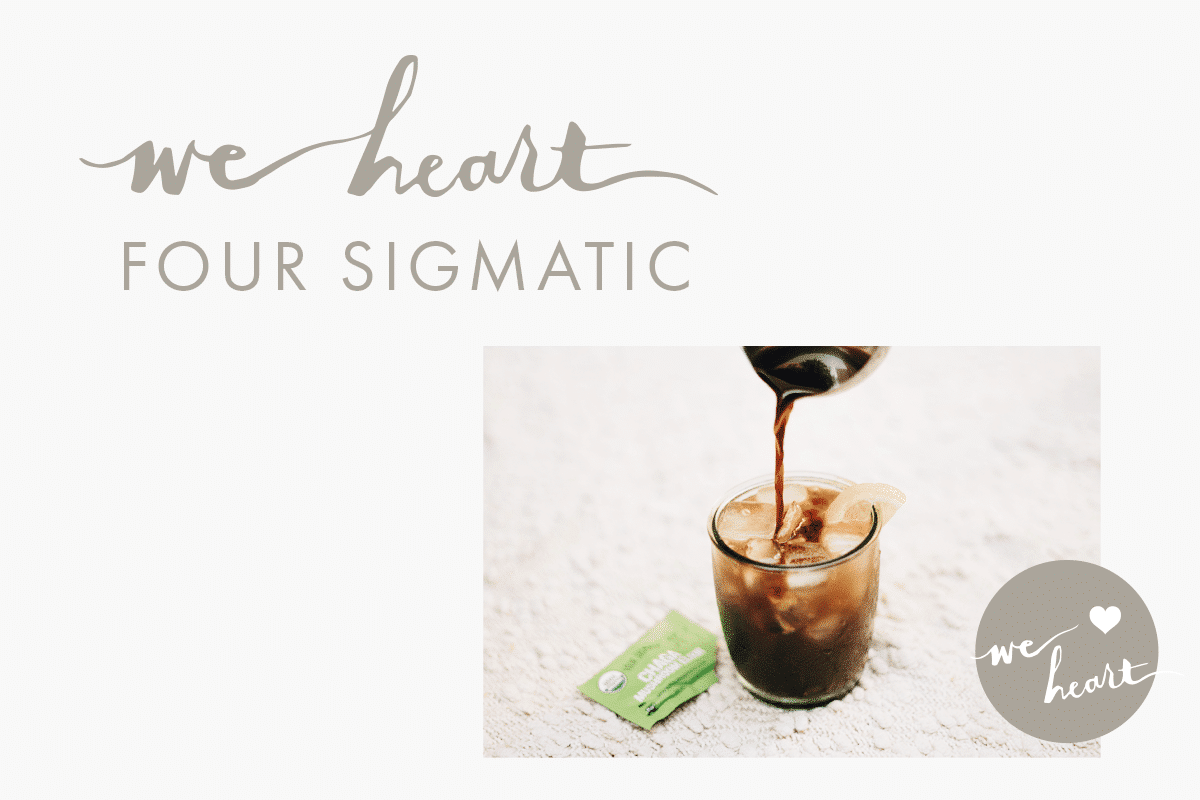 We’ve talked about the healing properties of mushrooms before when we wrote about the benefits of reishi and when we let you into the world of adaptogens, but we haven’t been able to get information to you like this before—with a ready-made, easy to use product that you can take with you on the go.

It’s delicious, full of nutrients, and it increases your overall health with every sip. We add it to our coffee drinks on busy days for an extra power boost and we drink it on its own for a relaxing afternoon. Add a little bit of milk and drop the whole treat in the frother… oh man.

We’re thrilled to let you in on our favorite little office latte secret: Four Sigmatic Chaga Elixir. Actually, Four Sigmatic has a whole line of some of best sourced mushroom products out there (the mushroom coffee is another favorite around here) that we’ve kept stocked in the office for a while, so when our affiliate manager, Jasmine, met them at Paleo FX and they were interested in being featured in our We Heart program, we were beyond excited.

Four Sigmatic is easiest described as a group of mushroom fanatics. The company is built entirely around the healing powers of mushrooms—those deep, immune boosting properties that help build energy reserves and give life to new power you didn’t know was in you.

Four Sigmatic has a pretty solid hashtag, #onshrooms, and not only do they stick by it, they basically define the meaning of what it is to be on mushrooms all day, everyday—the healthy way.

Four Sigmatic was started by a group of Finnish farm and forest humans (also known as the Finnish Funguys) who met in college and continued their journeys into corporate jobs. Through this work, they saw the culture of this fast-paced society sick of snake oil, sick of marketing for healthy superfoods and never living up to the hype, and realizing that people are just sick from over-processed synthetic foods and natural products that a/ weren’t so natural or b/ not actually effective.

How to Make Reishi Mushroom Tincture for Lifelong Immunity
5 Ingredients You Should Be Adding to Your Bone Broth
How to Have the Energy of a NinjaGoat: fatCoffee

The Finnish Funguys wanted to make a difference. To bring real, overlooked superfoods to people in a convenient way. They knew the lifestyle of the googleplex—instant gratification, fast-paced, myopic—and they wanted to create superfood formulas to serve the people in their network.

As an aside, we think that’s pretty cool, the truth is, when it comes to health and organics, it’s easy to share an awesome product with health-minded people because they’re looking for the benefits. It’s much more challenging to create or blend networks the way the Four Sigmatic is doing. They’re breaking into a culture of grab-and-go meals and quick, synthetic supplements with a product purely from nature that makes real, noticeable differences right away. This is definitely something we can get down with.

Anyways, so the Four Sigmatic gang had connected over the functional uses of mushrooms in college and the rest is pretty much history—Four Sigmatic was born.

The first question we asked when it came to writing about Four Sigmatic (and really when we’re writing about anyone else) was, “how do they source their products?” Because ASC is very conscious about how we source our own ingredients, we search for companies that have similar practices with respect to our planet. We were especially curious when it came to Four Sigmatic because many of the mushrooms they use for their coffees and elixirs grow naturally on trees in forests and are sensitive to over-harvesting.

We were really happy to find out that Four Sigmatic has an amazing process that keeps the mushroom populations safe while still really diving into the deep benefits that the mushrooms offer.

Four Sigmatic cares about the process from the harvest all the way to the customer’s hands.

It Starts with a Mushroom

Four Sigmatic uses the fruiting body of the mushrooms to make their products—many mushroom companies use just the mycelium, or the roots, which doesn’t offer the same benefits as the actual mushroom does.

So step one is the harvest. They work with farms and forests to make sure they can meet demands and take care of the planet. Some mushrooms can’t be grown on farms and do grow slowly so with those fruiting bodies, they never take the entire mushroom, only the outer layers, so that the mushroom can continue to produce.

They do their best to keep their mushrooms, when they can farm them, to as natural of a habitat as possible—letting them grow slowly on wood rather than in a lab with mycelium.

This is the part that makes me really excited. (Warning: health nerd alert.) The Four Sigmatic team uses a double extraction process, which I talked about in the reishi article linked above, because mushrooms have healing properties that span different types of cellular activity.

Some of those properties are water soluble but some, like immune-boosting polysaccharides, aren’t. So to get the full spectrum mushroom love, they need to be extracted by water and an additional medium (usually that means an alcohol extraction process) to make sure that the health benefits are fully bioavailable for us.

At this point the product is essentially a mushroom tincture—which is wonderful but it isn’t convenient. So they realigned with their mission of super convenience superfood and went farther.

They push the mushroom liquid extract into an evaporation tank, like a big dehydrator and most of the liquid is removed and the extract becomes super concentrated—but it still leaves it kind of sludgy. So they use a really high-tech spray drier, where they essentially blow hot air from a highly pressurized system until the rest of the moisture is gone.

This leaves a dry powder that can be easily hydrated.

The mushrooms are really potent and pretty bitter, so the Four Sigmatic team worked to make their powdered drinks healthy and tasty. They use other adaptogenic ingredients like Eleuthero and add herbs like rose hips and peppermint to boost the vitamin content along with making it taste a bit better.

From the creation stage it goes directly into the package. The rest is all about getting it into your hands and educating the public about the magic of mushrooms. They even have a free online course called the Mushroom Academy dedicated to learning about medicinal mushrooms and what they can do for our bodies. How amazing is that!

The four main mushrooms that Four Sigmatic uses in their blends are Reishi, Chaga, Cordyceps, and Lion’s Mane. When we met with the Four Sigmatic team, we wanted to offer the Chaga Elixir as a giveaway for our community because it’s one of our favorites, but we also wanted to share some information about the benefits of their favorite mushrooms.

This is one of the mushrooms that just can’t be grown in a lab and has to be harvested straight from the forest. Four Sigmatic harvests pieces from birch trees and only the sclerotium, the tough part of the mushroom that falls off when it’s done growing, gets used in the process so that the mushroom can continue growing.

Chaga is a super supportive for immune function and our elimination systems. It has high antioxidant content and offers a boost of energy to the consistent user.

In the wild, lion’s mane mushroom grows on trees although it can be grown in a lab with mycelium, the Four Sigmatic farms grows it on wood to keep it as pure and concentrated as it grows in the wild.

Lion’s mane mushroom helps to support cognitive functioning with long-term use by actually helping the body to create stronger connections between neurons in the brain. It helps to slow brain cell deterioration for increased memory and concentration.

This mushroom is an amazing example of the intelligence that exists in the wild. The typical way that it grows is through spores that imbed themselves into the brains of insects, like ants, and then drives the ants to seek high ground so that it can get to the nutrients and sunlight it needs to fruit. That’s a bit morbid for the Four Sigmatic crew, so they found a way to keep it vegan with their farm. So don’t worry, no ants were harmed in the making of their cordyceps products.

This mushroom is a total internal immune driver. It’s the kind of friend that is always there for you in the background. There’s no need for an overt spike in energy or a total overdrive of brain activity. Cordyceps works silently from deep within to help you find your own power and offering to help strengthen you in places where you need a bit of support.

Reishi is known as the mushroom of immortality. It can be grown in a lab now, and typically is, but Four Sigmatic does it differently than your typical mushroom crew. They know that a mushroom’s ideal nutrients come from their natural habitat, and that in centuries past reishi was a rarity found among the trees deep in forests that see four seasons, so they grow their reishi on fresh cut linden logs rather than growing them purely from mycelium.

It was worshipped by our ancestors and it isn’t treated any differently at Four Sigmatic. This mushroom is an immune booster that has an affinity to liver, kidney, and adrenal support. With long-term use this mushroom can help create a healthy body and a clear mind by allowing your body to relax into itself, which increases your ability to get a great sleep.

Click here to check out more from Four Sigmatic—take their classes, read about mushrooms, join the #onshrooms movement.

Do you have a favorite Four Sigmatic Mushroom Blend? Let us know in the comments below!

We share transparent companies with integrity, that we’ve fully vetted because we believe we’re all stronger when we work together to create a cohesive Earth-based, sustainable society.

Previous Post: « Be Happy, Lose Weight, In That Order
Next Post: Why You’re Having Menopause Symptoms (Plus 8 Natural Remedies for Hot Flashes) »