MENUMENU
You are here: Home / We Heart... / We Might Have a Crush on Aztec Sea Salt 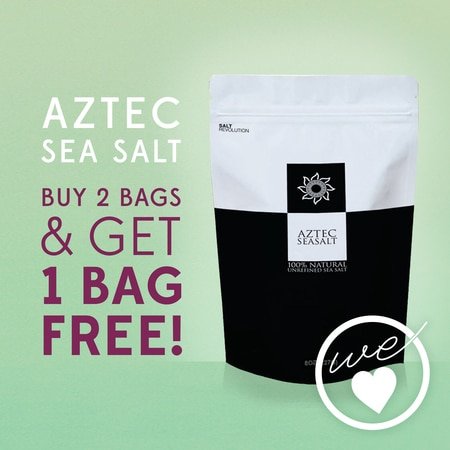 We’re here to talk about something we recently tried, which may just be the best of its kind. We loved it so much, in fact, that our own Kevin Gianni traveled south to observe its harvest from the Cuyutlán lagoon in Mexico.

It’s called Aztec Sea Salt, named in honor of the Aztecs who used to live and enjoy the salt in this area, which is now a small village of salt harvesters and ex-pats.

Many of us have heard about why sea salt is so much better for you, but it’s definitely not all created equal. We tried this salt and were utterly impressed by the intense flavor. Finding out that it is artisanally made (seen by Kevin’s own eyes) makes us feel even better about sprinkling it on our dinners.

We’re not just here to talk about this salt that we clearly have such a big crush on, though. We’re also going to tell you about why we don’t feel bad about including salt in our diets.

The thing is, current guidelines on salt tell us that if we exceed a certain amount of salt, we put ourselves at greater risk of high blood pressure and resulting complications. But research on this matter isn’t as complete as we think.

Recently scientists took a closer look at sodium, and what they found made some speculate that we can eat more of it than we think. At least some of us.

To Salt or Not to Salt

According to today.com, The American College of Cardiology recommends a salt intake of 1,500 milligrams a day, for adults. The upper limit suggested by the Centers for Disease Control (CDC) is a little more generous, under 2,300 milligrams. The average American daily salt intake? About 3,400 milligrams.

At this point you’re probably wondering where you fall on this spectrum and if it’s considered healthy. The good news (maybe) is that bulk of sodium in many Americans’ diets comes from prepared foods—restaurant meals, canned foods, things in boxes, etc.

That means that if you generally cook your own meals at home, using fresh ingredients, you probably don’t need to worry about shaking some salt onto the final product.

The other good news is that, according to a recent study by the New England Journal of Medicine, participants who followed the recommend 1,500 mg of sodium per day were actually at a higher risk of cardiovascular issues than those who consumed between 3,000 and 6,000 mg. Another analysis of this study? There’s not one country with a national average salt intake that’s as low as 1,500 mg.

When we talk about salt and related health problems, we’re usually talking about high blood pressure. Different studies preach different conclusions, but what we’re realizing is that there is wide range of healthy salt consumption.

Some people are more sensitive to salt-induced fluctuations in their blood pressure. Those with obesity, pre-existing high blood pressure, and kidney problems do have to keep more of an eye on their salt intake than others. But like we said, avoid those boxes, cans, and restaurant meals and you’ll probably stay within your health range.

Many people do not get as much potassium as they need, and studies have found that increased potassium can offset the blood-pressure-raising effects of salt.

Salt and potassium are electrolytes that work to maintain water and acid-base balance, and regulate the function of your muscles and nerves. They operate within the same system, so the balance is important. If potassium tasted so heavenly in our soups, on our spuds, and sprinkled atop our caramel desserts, perhaps we would be having the opposite problem.

As far back as 1997, the American Heart Association, who also brought us the 1,500 mg of sodium a day goal, published a study that showed how potassium could lower blood pressure, without any restrictions on salt consumption. They compared the effects of potassium, calcium, and magnesium, which have all been associated with lowering blood pressure. The most conclusive results were seen with potassium; indeed, blood pressure declined when participants took potassium supplements.

A more recent study (2005) from St. George’s Medical School in London showed that potassium from supplements and potassium found in food have the same or very similar effects on blood pressure. So if you aren’t into vitamins, grab some cantaloupe, beet greens, or acorn squash, and rest easy.

So About This Sea Salt…

Maybe you’ve heard of sea salt and wondered what makes it so special. Perhaps you’re already a junkie and won’t shake anything mined from the land.

Conventional salt production strips down the crystals, removing most to all of the healthy minerals. Salts can contain up to 92 trace minerals! Unless you take them away….

Anti-caking agents like sodium ferrocyanide are then added to keep it dry and shakable, and crystals are often bleached to obtain that unnaturally white color.

It seems silly when you think about it—involving more processing for a result that is less nutritious.

Sea salt shouldn’t be your main source of minerals—you can get much more from leafy greens and other healthy foods)—but when choosing a salt, why would you choose the less nutritious version?

There’s one problem: even sea salt can be processed.

Kevin tried Aztec Sea Salt and loved how it tasted. Serious salt crush love. So he traveled to Mexico to witness how it’s harvested.

The salt trade defines and sustains the small, 2,500-person town of Cuyutlán. There’s even a salt museum! Many involved in the salt trade only reside in Cuyutlán from February through May—harvest season. There are also many relocated Americans, who judging by the beautiful beach views, are there for more than the salt.

The method used to harvest Aztec Sea Salt here is artisanal, no machines required. There aren’t even boats involved, actually. Rather, brackish water is pumped up from below and collected into trays. Water is then evaporated out, leaving behind huge crystals of delicious sea salt.

The real beauty of this process? That’s all.

There are many reasons we recommend Aztec Sea Salt, but above all, it’s the taste. If you make food with Aztec Sea Salt instead of processed table salt, it will taste better. It’s sharp and full flavored, so much so that you actually only need a small amount to make your food taste amazing.

Recipe calls for a teaspoon of salt? A few pinches are all you need. And with an excellent moisture content, this salt also won’t dry out your food.

Since it’s only harvested 16 weeks out of the year, you have to be quick to get your hands on this crystalline gold. Don’t worry—we wouldn’t leave you with your mouth watering if this salt wasn’t yours for the snagging. A fresh new batch of salt just arrived, and if you buy two bags, your third is free! Order yours here.

New to the We Heart game? Every month we tell you all about something we absolutely love. We vet companies and organizations to make sure we can 100% stand behind them. So if We Heart it, you can feel good about it.

Got any companies you Heart? Tell us and we’ll look into it!