The Shared Economy: A Little Help from Our Friends 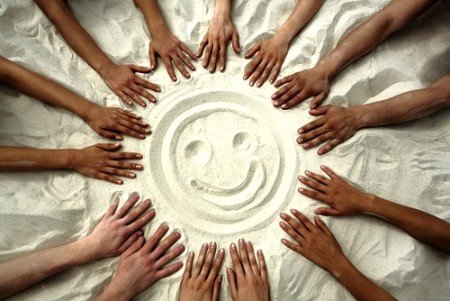 What does the sharing economy look like to you? Young things swapping ironic tees at a coffee shop? Artists selling handmade jewelry on Etsy? Sleeping in a stranger’s house in Paris for $100 a night?

It all fits. The so-called “sharing” or “collaborative” economy is multi-faceted and growing. It’s growing so fast, in fact, that consultant groups such as Crowd Companies have emerged to help large corporations navigate this new model.

There isn’t an agreed-upon definition for this system of collaborative consumption, but it often involves peer-to-peer transactions or solutions that allow people to rent or borrow, rather than buy.

Is it that different than going next door to ask your neighbor to borrow a cup of sugar? Well, thanks to the Internet and the tech folks who keep accelerating its progression, now practically everyone in the world can be your neighbor

Craigslist, with us since 1995, is a familiar player in the shared economy game. Once this site became part of our lives, that old bed frame you had became more than a giant, wooden headache. Getting rid of unwanted things suddenly was easier than flyering up your neighborhood and spending Saturday in a folding chair on your lawn.

Craigslist made it possible for us to connect locally to make peer-to-peer transactions. Now, years later, the use of technology in the shared economy has exploded, giving people tools to share with others all over the world.

If you walk down the street in an urban area, you will likely see how secondhand consignment has grown. Goodwill and Salvation Army have long been amazing resources that divert usable items once bound for the landfill.

More recently, stores like Buffalo Exchange and Crossroads are presenting a new kind of thrift, selling particularly selected, gently used items that tend to rotate seasonally, much like a normal clothing store.

Many shoppers now favor this kind of buying. These stores offer unique items with history, and prevent the creation of new garments, which involves factory emissions and the use of fossil fuels to transport materials. Also gaining popularity are clothing swaps, which skip the money aspect and allow people to trade their clothes with people near them.

Not in an area that has jumped on this bandwagon? Swapdom is an online resource for swapping your unwanted clothes via the web, with the only money involved being the shipping costs.

From Owning to Sharing

As options for renting things like bikes, tools, or even high-end clothing become more common, we may start finding ourselves with fewer unwanted possessions to begin with. The luxury of owning is giving way to the convenience of borrowing.

This is especially relevant in the case of cars. Unlike the baby boomers and generation X-ers, those entering the workforce and finding themselves able to purchase cars are commonly choosing not to. Whether this is due to the availability of car sharing companies like Zipcar, improvements in public transportation, or the overall hassle of owning a car, this trend has car companies worried.

For those who know little about the care and maintenance of cars, sharing instead of owning is a less stressful option. Car share company owners can take on the burden of caring for these (to the mind of the writer) mystical metal creatures. Of course, car renting isn’t new. What startups are doing, however, is catering their prices for people who want to use these services regularly, and make using shared cars as easy as downloading an app to your phone.

It can and is going further. In 2008, Washington, DC became the first city to create a bicycle sharing program that allows locals and visitors to rent a bike for a day or longer, with pick-up and drop-off spots throughout the city. Soon Miami, Boulder, San Francisco, Boston, and over 30 other cities followed suit.

Bike renting is no longer just what you do on a beach vacation with your family. It’s helping people run errands, exercise, and visit friends. Further, those who have lived in a city filled with cyclists can attest: bike theft is very common and costly. Bike sharing programs are better equipped to handle as well as prevent these losses.

Sharing Our Houses, Too?

Speaking of moving away from individual ownership, we have to talk about housing. Housing cooperatives are the most classic example of the shared economy. When your home is a shared entity, the collaborative economy is indisputably part of your daily life. Many people living in such communities share chores and food as well.

A strong argument in favor of these networks is that they keep money in a community and can prevent gentrification of neighborhoods. This video illustrates what are commonly thought of as positive effects of coops, as well as the legal barriers to creating them.

Despite the financial savings of shared housing, the individualistic nature of our country can make cooperative housing arrangements sound frightening and extreme. Practically everyone who has been through college has heard a roommate horror story or two. Sharing spaces is difficult, whether you’re squished against a stranger on a city bus or trying to settle a dispute with a neighbor about a dog who barks loudly, late into the night. So for those not quite so passionate about collaborative culture, you can still participate in this new economy without living under its roof.

Making a Little on the Side

One large demographic served by the new economy is those without full-time jobs, or those looking to transition out of the classic work week schedule. Only one-third of the U.S. workforce is actually employed full time. Another third is self-employed and the last third is contingently employed.

For two-thirds of the population, either full-time work isn’t there or they don’t want it. The shared economy is making it more possible for this group of people to bring in revenue.

With apps like Stylebee and Glamsquad, stylists can now offer their services to people near them without having to work for or own a salon. Dog lovers can make a few bucks hosting critters on Dogvacay. Artists are just killing it on Etsy. These sites and apps are providing people with tools to make money without starting a business or owning a storefront. For those without excess capital lying around and those tired of the 9 to 5 workweek, this is big.

Heck, even Youtube plays a role in this new economy. If you are a music artist, make up tutorial guru, or health consultant, what was your platform before Youtube? Of course, not everyone using this site realizes success (which is probably for the best), but it has aided the careers of many who have put themselves out there. Some start just to entertain themselves or their friends, and eventually find themselves with endorsements, gigs, and/or record or book deals.

Even those who are pursuing funding to start large projects can now do so without having to know “the right people.” Whether or not you come from money, if you have a good idea and you can use the Internet, crowdfunding campaigns like Indiegogo and Kickstarter can help your idea become real. This is powerful in the sense that it changes the social mobility rules ever so slightly, while also giving the public the opportunity to essentially vote (in the form of contributing money, even very small sums, to campaigns) for the kinds of projects and products they want to see materialized.

Annie Lowrey with The New York Times puts it well when she explains that generations x and y “have accrued less wealth than their parents did at the same age, even as the average wealth of Americans has doubled over the last quarter-century.” It’s no wonder then that younger generations are looking for opportunities to share what they have, given that wealth seems to be tied up in a select handful of hands around the country.

Millennials may not see the financial success that we once thought we would, but we’re learning to improve our quality of life by depending less on money and more on our neighbors.

As Ringo Star famously told us, “I get by with a little help from my friends.”

Tell us how you may participate in a shared economy?

Report: Sharing is the New Buying, Winning in the Collaborative Economy

Previous Post: « Tired All the Time? Take a Closer Look at Adrenal Health!
Next Post: Earth Day—10 Tips To Boost Your Green! »