Now more than ever, we want to connect with our customers. Click here to set up a personalized skin consultation with our team.
MENUMENU
You are here: Home / Healthy Lifestyle / Why Antacids Don’t Work (Use This Herb To Ease Acid Reflux, Instead) 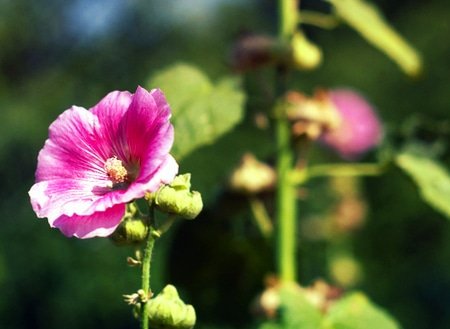 I have a friend who has had acid reflux, heartburn, and general stomach pain for more than 25 years. With the added stress from a new job, a loss in the family and a difficult winter, his stomach was acting up daily and taking a serious toll on his health. His prescribed antacid routine helps his symptoms, but it doesn’t heal his stomach. In fact it has made the problem progressively worse.

In January I sent my friend some marshmallow root. I gave him directions on how to use it to its maximum potency and he called me just last week and told me that he can feel it healing his stomach. I’m really excited to hear that news, of course, but I’ll tell you the same thing I told him: this isn’t a fast fix. Acid reflux is a bear of an illness to live with and to work with. It’s painful, it comes on fast, and the typical allopathic fix for the pain exacerbates the actual problem. The very best way to combat acid reflux is to have a real understanding of you’re working with.

What is Acid Reflux?

Acid reflux, also known as GERD, is caused when digestive acid produced by the stomach moves into the esophagus. Stomach acid has a pH in the same vicinity of concentrated sulfuric acid, lemon juice and vinegar (around 1.5 for your chemistry lovers) and your esophagus is a thin tube of unprotected mucous membranes and soft tissue. You see where I’m going right? If the stomach acid gets up into the esophagus even once, you’re hurting. If it happens over and over again, your body doesn’t have a chance to heal the irritation and it can become a really serious problem.

But Aubrey, doesn’t that mean that there’s too much acid in the stomach?

The human body is an amazing thing and the production of digestive juices is really important. Starting with the mouth, chemicals released throughout your body by your digestive process let your LES know when to open and close. If you’re low on digestive juices, your food is going to sit in your stomach and digest too slowly, which creates gas and puts pressure on your LES, which can open just a tiny bit to relieve the pressure (or maybe never got the signal to close) and the stomach acid goes “BLAM! I got you, esophagus!” Even a tiny bit of stomach acid in your esophagus can cause major pain.

Now do you see why I mentioned that antacids are actually making things worse for people suffering with acid-reflux? They decrease the amount of acid in the stomach, effectively forcing your stomach to work a whole lot harder to digest your food and they confuse your LES muscle by not allowing for the natural signal for it to close when your stomach is digesting food.

We talked about the importance of gut health and the bitter herbs that stimulate digestion, but if you suffer from acid-reflux or chronic indigestion, it’s important to start slowly with your healing process so that you don’t overload your system. If your LES isn’t closing properly on a consistent basis, it gets used to working that way. If you add bitters to your routine right away to increase your digestive secretions you could be in a world of hurt. I’m talking severe ouch.

That’s where marshmallow root comes in! Marshmallow is demulcent, emollient, and anti-inflammatory – that’s herbal speak for, “it’s juicy, smoothing, and soothing.” It’s made up of 10-30% mucilage, which means it’s really gooey when prepared with water, and that mucilage coats the esophagus and the stomach. This mucilaginous coating effectively protects the LES and esophagus from the stomach acid, so if acid gets up into your esophagus it won’t irritate the smooth muscle.

After your insides are all good and coated, marshmallow’s emollient and anti-inflammatory actions go to work soothing your irritated smooth muscle and mucous membranes, giving them some nourishing love, and the chance to heal naturally! Obviously, this isn’t a one time deal. You can uses marshmallow root for acid reflux pain in your stomach or esophagus, but in order for your body to actually heal itself from this painful disease, you will need to take the marshmallow infusion pretty consistently.

How to Prepare your Marshmallow Root

A suspended cold infusion of the marshmallow root will pull the most mucilages out of it that you can get. The cold infusion takes a few hours, so if you’re in a pinch, a regular hot tea infusion or mixing a teaspoon of the powdered root in a cup of water works really well for a stomach ache.

Ratio for infusion: 1 Tablespoon of herb to 1 Cup water. You may want to make quite a bit of this at one time to save yourself time and energy so extrapolate this recipe as needed.

Depending on the severity of your acid-reflux and the damage done in your esophagus and to your LES, you may have to continue this measure for some time before you see a marked difference – you may also see an immediate difference like my friend.

Remember, bodies work in amazing ways! This is just step one on your healing journey so work with your herbalist on your next steps to optimal gut health. They may have you add herbs to your cold infusion (chamomile is an amazing herb to steep cold with your marshmallow) or move you to a neutralizing cordial to help add some bitters to your routine without the serious pain.

Other Uses for Marshmallow Root

We focused a lot on acid reflux in this article because it’s such a prevalent disease in our cultural and it’s totally treatable with some simple herbal remedies and self care. But marshmallow is great for a lot of other things too!

The same mucilages that coat your throat don’t break down in the body until they reach your colon, so marshmallow root is an awesome way to treat all sorts of irritation or inflammation all throughout your digestive system. Everything from a simple sore throat to Crohn’s to ulcerative colitis can get relief with regular use of marshmallow root.

You can gargle with it for inflammation or ulceration in your mouth and you can use it with a dry cough. It makes a great lubricant and in ancient times was used for impotency and as an aphrodisiac. It’s safe for kiddos and during pregnancy and yes, you can make real marshmallows with it!

The only times you’ll want to avoid marshmallow root is if you’re having a lot of mucosal congestion or if you’re on some important medications. It’s so juicy that it can interfere with the absorption of pharmaceuticals so give yourself a few hours between drinking your marshmallow infusion and taking your meds.

So go get yourself some marshmallow root, experiment with it, and let us know how it makes you feel in the comments below!

Hobbs, C., & Gardner, L. (n.d.). Grow it, heal it: Natural and effective herbal remedies from your garden or windowsill.

Why You Should Avoid Commercial Baby Food (Plus, Recipes from Annmarie)
Next Post: The Organic Skin Care Story and the Rebels Who Championed It