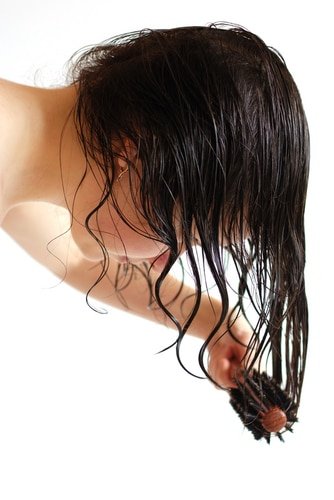 You know how your hair feels soft and smooth after you put conditioner in it? You may think that's because your conditioner gives the hair what it needs to be healthy. Unfortunately, in most cases, that's not it.

Many conditioners contain chemicals that coat the hair strand, making it act like it's healthy. In reality, it's in the same condition as before with a few chemicals putting on a show for awhile. Have no doubt—when the chemicals wash off, your hair will go back to being dry, frizzy, and dull.

How can you tell if your conditioner is truly helping your hair or only covering it up? Like everything, it depends on the ingredients. If you read “cyclotetrasiloxane” in the list, you've probably you've got a more chemical formula on your hands.

Also called “octamethylcyclotetrasiloxane,” this ingredient is one of many “siloxanes,” which are made up of silicon, oxygen, and alkane. (Silicon is a nonmetallic element abundant on Earth.)  In other words, it's a silicone-based ingredient used in cosmetics, deodorant, defoamers, lubricants, and soaps to soften, smooth, and moisten. Siloxanes make hair products dry more quickly and deodorant creams slide on more easily.

Like so many of the chemicals in personal care products, this one has been generally considered safe—particularly in rinse-off products like conditioners. But research from Canada in 2008 raised concerns about cyclotetrasiloxane (also called D4) and its sister chemical, “cyclopentasiloxane” (also called D5).

According to the Environmental Working Group (EWG), the government in Canada declared these two chemicals potentially toxic around January 2009. At that time, the government had serious concerns about the hazards of the chemicals, and prioritized them for action to ensure exposures were safe for people and the environment. Environment Canada and Health Canada proposed adding both to the list of toxic substances, and to develop regulations to limit the quantity or concentration of D4 and D5 in personal care products.

According to Environment Canada, D4 and D5 are toxic, persistent, and have the potential to bioaccumulate in aquatic organisms. The European Union also classifies D4 as an endocrine (hormone) disruptor, based on evidence that it interferes with human hormone function, and may impair human fertility.

California has also done some looking into this ingredient, and it seems they are also concerned. According to the Office of Environmental Health Hazard Assessment (OEHHA)—a specialized department within the California Environmental Protection Agency that evaluates health risks from environmental contaminants—cyclosioxanes like D4 and D5 have “long half-lives in people. The weak estrogenic activity of D4, in combination with its long half-life, poses potential concerns for exposed individuals.”

In other words, one exposure to the chemical may not hurt you, but we use this ingredient every day in our homes, in our hair, and in our bathtubs, and so far, we don't know what that means for our health.

What about D5? The OEHHA states, “While studies have not shown D5 to be estrogenic, it nonetheless increased uterine tumors in animal studies. In addition, there are potential concerns related to effects of D5 on the neurotransmitter dopamine and the hormone prolactin.” In other words, this chemical could be affecting our brains and nervous systems with repeated exposures, but we need more studies to be sure.

What About the Environment?

On top of the health concerns, these chemicals have been found to resist breakdown in the environment. The OEHHA has detected D4 in wastewater streams. “Certain siloxanes are persistent in the environment,” they stated, “resisting oxidation, reduction, and photodegradation.”

A more recent announcement by the government of Canada concluded that D5 is not harmful to the environment, after a review of all available scientific information. Apparently the word on D4 is still out.

On the whole, these siloxanes are probably not going to hurt you. Most are in rinse-off products, so as long as you're not using them in the bath (where you soak), you're probably not exposed long enough to cause significant health problems.

The danger to our waterways, however, may be more serious. We are still awaiting more tests to determine just how much damage D4 may do in the long run.

Of course, my feelings as always are to avoid the iffy chemicals and go with more natural, nourishing products. Why pretend your hair is shiny and healthy when you can get the real thing with olive oil or coconut oil? There are several organic companies out there, as well, making safer products that you won't have to worry about, or you can try some of the many homemade conditioner recipes you can find on the Internet. I say it's worth a little investigation!

Do you have siloxanes in your conditioners and other personal care products? Please share.

Michael D. Shaw, “Some Good News Regarding Siloxane D5—And Why You Should Care,” Marhc 19, 2012, http://www.gasdetection.com/Interscan_News/health_news_digest355.html.

Helichrysum for Skin, Reduce the Appearance of Age Spots
Next Post: Malva for Skin, the Gentle, Soothing and Softening Flower