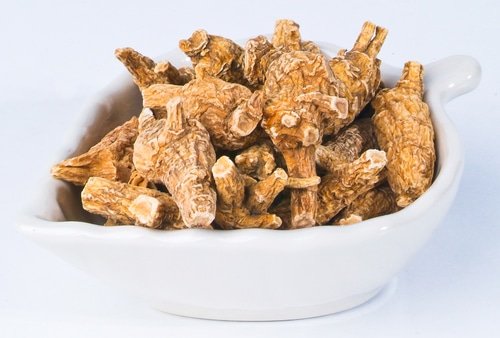 Ginseng was originally named “man root” because its roots resemble little people, with forks that look like arms and legs. Both the root and the leaves of this plant have benefits to humans, from antioxidant to energy-supporting properties.

In skin care, ginseng is prized as an anti-aging ingredient because it has so many phytonutrients, and because it helps tone and brighten skin.

This ancient Ayurvedic remedy may help reduce the appearance of your age spots.

All types of ginseng are slow-growing perennial plants found in the northern hemisphere and in eastern Asia. Ginseng likes to grow in temperate forests, and has been used in Chinese traditional medicine for centuries. Considered an “adaptogenic” herb, it helps the body to adapt to the environment, deal with stress, and resist environmental damage.

The roots are said to be slightly sweet and licorice flavored. They can be eaten dried, steeped to make tea, or ground into a powder for medicinal use. The Chinese have used the herb mostly as an energy tonic, as ginseng helps stimulate energy.

Scientific studies so far are limited on ginseng, but some have shown it to have promise in several areas of human health:

Ginseng's Benefits to the Skin

Ginseng is considered a strong anti-aging skin care treatment because of its reputation for rejuvenating the look of your skin.

Like most herbs, ginseng also protects the skin from environmental stressors.

We use ginseng in all these formulas for its many beneficial properties. Like so many natural ingredients, it provides a number of benefits that help all types of skin.

Do you use ginseng for its energy-inducing or concentration benefits? Let us know!

Ashwagandha, the Calming Herb For Oily Skin (and Your Mind)
Next Post: Ingredient Watch List: Chlorphenesin, the Synthetic Preservative That Can Cause Dermatitis and Infant Respiratory Distress