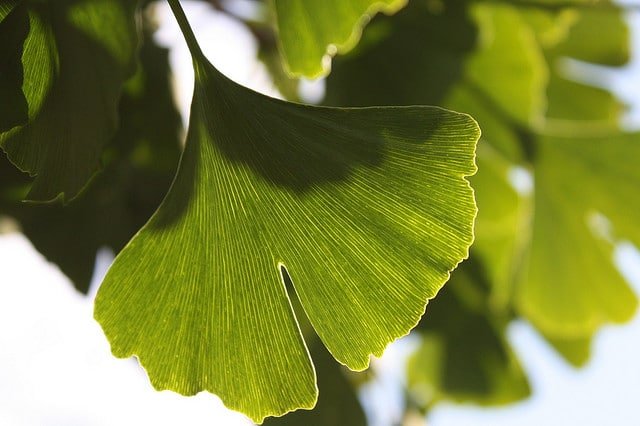 Ginkgo biloba is a popular herb, with a reputation for improving memory and blood flow when taken internally. Lately, however, we’ve discovered that it also may have benefits in skin care products. You'll find ginkgo in our Anti-Aging Facial Oil, Serum, and Eye Cream.

Ginkgo is an Asian tree that’s been around for centuries. Known as one of the oldest living trees on Earth, its leaves are used to make an extract that’s one of the bestselling supplements in the U.S. and in Europe. A single tree can live as long as 1,000 years and can grow to a height of 120 feet. It’s most distinguishing characteristic is its fan-shaped, notched leaves, though it also sprouts an inedible fruit.

The tree has a reputation for being “tough” and able to withstand difficult environments, as it is resistant to disease and insects, though it grows best in soils that are well watered and well drained.

Ginkgo has long been used in traditional medicine to enhance memory and treat blood disorders. More recent scientific evidence has supported these uses, though not all studies have shown similar benefits.

Ginkgo leaves contain flavonoids and terpenoids believed to have potent antioxidant properties that may protect the health of cells and DNA. Laboratory studies have found that flavonoids can help protect the nerves, heart, blood vessels, and retina. They have also indicated that terpenoids may improve blood flow by dilating blood vessels and reducing the ability of platelets to form a blood clot.

Recommended Reading:
Is MCT the Key to Better Memory and Increased Energy?

Ginkgo’s main promise in skin care is its antioxidant compounds. Since much of skin aging is caused by environmental stressors. Ginkgo’s ability to protect may help reduce the appearance of wrinkles and fine lines.

Extracts from ginkgo leaves have also shown to help with oily skin and clogged pores as well as for people with sensitive skin.

Finally, ginkgo is a natural cleanser. This means it can help clean the skin of dirt, oils, impurities and other debris. Some cleansing masks are including ginkgo already for this purpose.

Though research is still new on the use of this herb in skin care, I look to see the extract gain popularity in the years to come. Meanwhile, you can use your ginkgo extract to mix in with your masks and homemade anti-aging treatments, or you can try it in one of our products:

Recommended Reading:
Is MCT the Key to Better Memory and Increased Energy?

Annmarie Gianni is a mother, health activist, entrepreneur, and founder of 3 successful businesses. Over ten years ago, she and her husband, Kevin, formed a team and Annmarie Skin Care was founded to provide a clean, skin care made with natural ingredients experience using natural, organic and wildc…
Read more

Previous Post: « Here’s What You Need To Know About The Balm Boom
Next Post: Ingredient Watch List: Urea, the Preservative that May Release Formaldehyde »
Reader Interactions