Edelweiss for Skin, Small and White, but with Anti-Aging Might 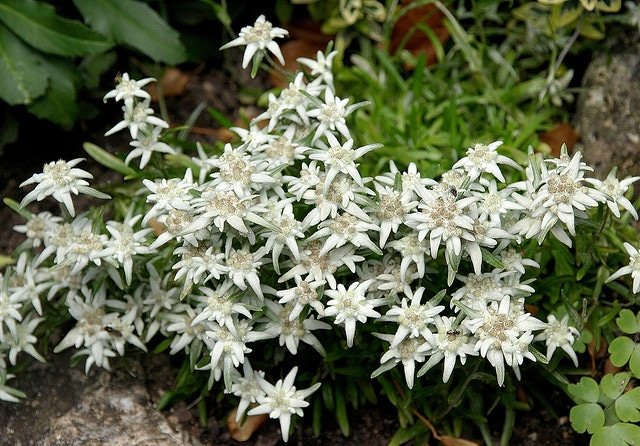 The German word “edelweiss” means “noble and white,” or “noble whiteness,” which describes this perennial plant perfectly. Found at altitudes of 5,000 – 8,000 feet, edelweiss is known to grow at great heights, on cliff sides, and in other dangerous areas, which made the pursuit of the elusive white flowers a challenge young men liked to take on to prove themselves.

Though a historic badge of courage and prestige, today edelweiss is a powerful force in anti-aging skin care.

You heard about them in “The Sound of Music,” but now they're popular in anti-aging products.

A member of the sunflower family, edelweiss (Leontopodium alpinum) can grow up to eight inches high with five to six small flower heads surrounded by specialized white leaves in star formation, blooming between July and September. It likes rocky limestone places at higher altitudes and grows a sort of wooly hair on the flowering leaves, apparently to protect them from the cold and ultraviolet radiation.

The scientific name comes from Greece and means “lion foot of the Alps.” The flower became so prized among hikers in some countries that governments in Austria, Germany, and Switzerland now protect it in certain parts of the Alps. Also called the “Queen's flower” in Greek, it's white color is considered a symbol of purity. The plant is widely cultivated today, however, in many countries around the world.

Like most herbs, edelweiss was used historically for certain health benefits. After drying, the flowers can be cut and prepared in an alcohol solution, so the extract can be used as a medicinal herb. Edelweiss was known to help diarrhea and dysentery, and was actually called the “stomach ache flower” in Germany. It was also used to help combat tuburculosis and diphtheria, and was popular mixed in with hot milk and honey. One of its oldest uses was for the treatment of rheumatic pain. It was also used to help soothe coughs.

Today, however, the world is more excited about edelweiss' action as an anti-aging herb.

Edelweiss's Benefits to the Skin

When scientists got their hands on this plant, they found that it contained all sorts of great compounds beneficial to the skin. These include chlorogenic acid, luteolin, bisabolane derivatives, and beta sitosterol. Here's a little more about these:

Combine all these properties and you have an herb that helps protect from environmental stressors—while nourishing the skin and providing an overall soothing, calming effect.

Edelweiss was a natural fit for our Anti-Aging Serum.