MENUMENU
You are here: Home / Ingredient Watch List / 3 Harmful Ingredients that Might Be in Your Nail Polish 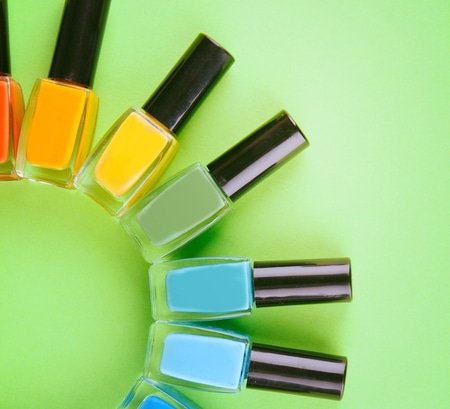 You know that chemicals in regular nail polish can’t be good for you. Your nose tells you every time you walk into a salon, or open up a bottle at home.

What you may not know is just how much you’re putting your health at risk every time you paint that color on.

So far, we don’t have any way to test how a lifetime of nail polish might affect a human’s health. We have seen some concerning studies, though.

In 2010, for example, researchers reported that chemicals called “phthalates,” which are present in nail polish and other cosmetics, could cause women to go through menopause as much as 2.3 years earlier than normal. Exposure to phthalates has also been linked to an increased risk of diabetes, thyroid issues, infertility, and child developmental problems.

Phthalates are only one group of chemicals in nail polish that could negatively affect your health. Below, we’ll look at some of the others. Don’t worry—you don’t have to go with bare nails (unless you want to, of course!). We have a natural brand of polish that doesn’t have all those nasty chemicals that we’re excited to recommend to you.

When looking at most nail polishes, we see a trio of potentially dangerous chemicals. Known as the “toxic trio,” they have been linked to the health problems mentioned above, as well as other illnesses.

These three chemicals are of such concern that a few select cities, including San Francisco and New York, have passed ordinances to recognize nail salons that are “free of the toxic three.”

This chemical is a solvent, added to nail polishes to help evenly distribute the color. (It’s also used in paint thinners, rubber, adhesives, and lacquers, and is found in car exhaust and cigarette smoke.) Though the amounts in each bottle are low, the chemical is listed on California’s Proposition 65 as linked with cancer and birth defects.

Inhaling the chemical can cause neurological damage, as well as more minor side effects like fatigue, confusion, nausea, and weakness. Those who work in a nail salon, where they’re breathing in toluene over long periods of time, may also be at risk of depression and brain damage.

The Centers for Disease Control and Prevention (CDC) notes that use of nail polish or nail polish remover containing toluene may result in the chemical passing through your skin and into your bloodstream.

This is one particular type of those “phthalates” we mentioned at the beginning of this post. It’s known as a “plasticizer,” but in nail polishes, it’s used as another solvent for the dyes. It also helps prevent the polish from becoming brittle. The chemical is banned from cosmetics in the European Union, and was added to California’s Proposition 65 as a suspected “teratogen” (something that causes congenital abnormalities) in 2006. The U.S. also banned it from being used to make children’s toys in 2008, but it’s still allowed in nail polishes.

Researchers confirmed that DBP is absorbed through the skin in a 2007 study. In addition to being linked to developmental problems, it’s also believed to be a hormone disruptor, to impair fertility, and to be toxic to aquatic organisms.

After measuring phthalate metabolites in the urine of over 2,600 participants, CDC researchers found that they are widespread in the general population. Women had higher levels than men for those phthalates “used in soaps, body washes, shampoos, cosmetics, and similar personal care products.”

This colorless gas that is often found in nail hardeners (as it is a hardening agent). Nail polishes may use formaldehyde resin, or preservatives that emit formaldehyde once the bottle is opened. Other forms of formaldehyde, including formol or formalin, are sometimes used as preservatives.

In 2011, the U.S. National Toxicology Program named formaldehyde as a known carcinogen. The National Cancer Institute notes that studies on workers regularly exposed to formaldehyde found that they were at increased risk of leukemia, and cancers of the nose and throat.

The CDC notes that breathing formaldehyde can cause sore throat, cough, scratchy eyes, and nosebleeds.

If you were already aware of the toxic three, you may already be using what you think is a safer nail polish. But be warned.

In 2012, the California Department of Toxic Substances Control (DTSC) tested 25 products from six different distributors. Twelve of those claimed to be free of at least one toxic-trio chemical. Seven claimed to be free of all three, and 13 made no claims about these chemicals. This last group was labeled the “traditional” products.

In a letter to the California Governor and the Secretary for Environmental Protection, DTSC director Deborah O. Raphael stated, “Today, I am releasing results of a DTSC survey of nail care products that I can only describe as disappointing, and a wakeup call for greater transparency about chemicals used by an industry with approximately $6 billion in annual U.S. sales.” She added that based on study results, consumers cannot “put confidence in claims that products are free of the toxic-trio chemicals.”

You can scan the report for the actual brands that were tested here.

We Have Nail Care Products You Can Trust

If you’re convinced it’s time for a change, we have a recommendation for you.

Zoya was founded in 1986, and has focused on natural nail care products from the beginning. You’ll find a large selection of polishes and removers that are free of the toxic three, and with this brand, we feel good about the fact that when they say they don’t have these chemicals in their formulations, they really don’t!

Let us know if you try Zoya, or if you have other natural brands you love. If you’re looking for other natural alternatives, keep these tips in mind:

What do you think about toxic chemicals in nail care products? Have you switched brands to reduce your exposure?

US National Library of Medicine – Toleune

DIY: How to Keep Pests Out of Your Home, Naturally
Next Post: 5 Strange Beauty Trends That Are Not For the Faint of Heart